Over the past several years, the Manufacturers’ Council of the International Ultraviolet Association (IUVA) has developed a protocol for testing of the UV efficiency of low-pressure and low-pressure high-output UV lamps. The first version of this protocol was adopted in 2008 (Lawal et al., 2008). A round-robin test of this protocol was conducted in 2009, but the results were not satisfactory. In reviewing the 2008 protocol, there was no flaw in the requirements but rather the practice. Such factors as adherence to protocol, reflectance and measurement methods led to high sources of error.

Hence, in 2013, The Manufacturers’ Council adopted a revised protocol (see Appendix A on page 15) that further refined the requirements of the 2008 protocol. Before finalizing this new protocol, it was decided to conduct a second Round Robin. This paper presents the results of this new Round Robin.

The Round Robin was initiated by testing at Light Sources Inc. (Orange, CT) of 15 Light Sources 320 W (model GPHHA1554T6L/4P) low-pressure high-output (spot amalgam) UV lamps (arc length 1.475 m) according to the revised Protocol using an electronic power supply (Philips Electronic Ballast – Model TUV 325W XPT) and a recently calibrated radiometer (International Light model ILT 1700 with an SED240 detector with an NS254/NS254 filter and a W diffuser). After the tests were completed, the lamps, power supply and radiometer were shipped sequentially to nine other manufacturers where similar tests were conducted. 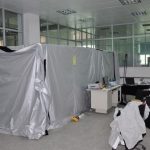